BSBI's eleventh New Year Plant Hunt will take place from 1st to 4th January 2022 and we hope that you will take part. 1,811 people took part in our last Hunt! Data collected by New Year Plant Hunters are helping us build up a clearer picture of how our wildflowers are responding to changes in autumn and winter weather patterns.

There are many benefits to being a BSBI supporter, and even more is on offer if you join us! We set out how we can help and support you, as you learn more about wild plants.

BSBI grants for training, plant study and research can help you whether you are an amateur botanist taking your first steps in botany and want to try a short ID course; or if you are an undergrad carrying out a plant study project; or if you are an academic researcher/ PhD student undertaking work which will result in a scientific publication. Applications open on 1st January and are snapped up quickly so be ready to apply!

My name is Kwesia and I am City Girl in Nature. I am on a quest to introduce children and young people to the wonderful world of nature and outdoor adventure. To help heal and inspire. Please visit my website and socials for more information. I am seeking supporters, collaborators and fellow travellers.

Images from this year's BSBI Photographic Competition will be displayed on a loop during breaks in the Annual Exhibition Meeting programme. This exhibit gives a brief background to the competition, now in its 7th year, displays the winning images from 2021 and invites you to enter the 2022 competition. A link to BSBI Flickr is also provided which enables all previous entries to be viewed.

Ellenberg indicator values for plant species are widely used metrics in ecology, providing a proxy measure of environmental conditions, without direct measurements. They integrate environmental conditions over time since species will only persist where conditions are favourable. Ellenberg moisture (F) values summarise the hydrological environment experienced by plants. However, the relationship between indicator values and hydrological metrics appears to be influenced by a range of other abiotic and biotic factors, limiting our ability to fully interpret Ellenberg F. Focussing on Ellenberg F, we evaluated how the unweighted mean plant community F value to hydrology, specifically water table depth, is influenced by other environmental factors, ground cover type and alpha diversity in UK seasonal coastal wetlands (dune slacks). As expected, water table depth had the strongest influence on unweighted mean Ellenberg F. We show that unweighted mean Ellenberg F was more sensitive to changes in water table levels for plant communities that were more nutrient limited, when the organic matter layer was thicker and there was less bare ground cover. Unweighted mean Ellenberg F was consistently lower for a given water table depth, when there was lower atmospheric nitrogen deposition, lower loss of ignition (a measure of organic matter content) and more diverse plant communities. These findings help us to better interpret what Ellenberg F indicator values tell us about hydrological conditions, by understanding the factors which alter that relationship.

Monica Frisch presents some highlights from a survey of orchids in the city of Cambridge.  The main findings were that nine species of orchid were recorded in the NatHistCam area, and that the number of species per tetrad was greater than in Cambridgeshire as a whole.  The work was done as part of the NatHistCam project and resulted in an article in the Journal of European Orchids.

BSBI's Aquatic Plant Project has been running in Ireland for three years now. We've made huge progress on our goals to provide training and increase recording of aquatic plants, but there is so much more we'd like to do! This exhibit summarises the fantastic achievements of the project so far and our ambitions for the future. For more details and resources, check out the Aquatic Plant Project webpage.

(This was to have been a full-length talk, but I have no voice at the moment, so it is presented as a slide show, and a 1-minute flash talk with my words voiced by a friend.) There are so many young – and indeed older – people out there who would benefit from basic ID training and who could eventually become a substantial asset to the botanical world. You could run a workshop or training course for them in your area. This exhibit gives you some pointers to making it a great success.

The classification of British elms has ranged from one variable species, to two, three, five or eight, often with named hybrids and varieties. Oliver Rackham (Woodlands, 2006) remarks 'There are arguably more kinds of elm in England than of all other native trees together' and elsewhere regarded Ulmus as 'the most critical genus in the British flora'. Sell & Murrell (Flora of Great Britain & Ireland, 2018) proposed a classification with 62 species and no hybrids or varieties. I have spent the summers of 2018-21 trying that classification out.  I have seen 61 of the 62 taxa in the field, plus half a dozen not included in the Flora. I have produced a more practicable and better-illustrated key to elms: it can be downloaded free from https://www.wildlifebcn.org/sites/default/files/2021-07/Complete key to native and naturalised elms.pdf  I hope more recorders will try out the new classification, and give me feedback on the key, so we can learn more about their distribution and ecology. 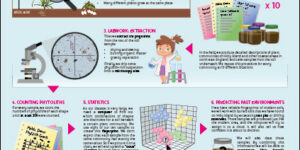 This poster illustrates the potential of phytoliths (plant microfossils) for reconstructing past environments, and presents the research design of a study centered on Holy Island/Lindisfarne in Northumberland. Full-screen mode recommended.

The Ophrys genus of orchids have evolved sexually-deceptive flowers, four species of which can be found in the British Isles. By mimicking female Hymenoptera, two of these species exploit male insects for cross-pollination, in comparison to another species which has switched to self-pollination. Through herbarium specimens collected between the early 1800s to 1980s, we have a snapshot of historical pollinator activity. Insects in general appear to have declined with increasing anthropogenic disturbance to ecosystems and climate warming seems to be leading to phenological mismatches between plants and their pollinators. Examining herbarium specimens for presence/absence of their pollinia could be used to test whether pollination services to cross-pollinated orchids have also declined, whilst self-pollinating species have remained relatively constant as predicted.

The Rare British Plants Nursery is home to a unique collection of very rare native plants. Our plant nursery is an active resource for research and conservation. Our species recovery projects are securing the long-term future of some of the most threatened and endangered species in the British Isles.

The Big Meadow Search is a citizen science project launched in the summer of 2021 with the aim of raising interest and awareness in the importance of grasslands whilst adding valuable records to local environmental records centres. An additional objective is to showcase the relationships between grassland plants and other species such as invertebrates, rusts and galls. We aim to extend the project across the UK and to build a community of grassland enthusiasts. 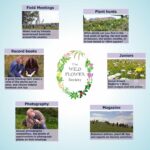 The Wild Flower Society promotes knowledge of field botany and appreciation of the British flora. Our members enjoy a programme of field meetings, our new online meetings, plant hunts and record books, photographic competitions and the Wild Flower Magazine. Our membership ranges from beginners and juniors through to experienced botantists.

From the Cairngorms to the South Downs, from Exmoor to Rannoch Moor, the NPMS is providing robust botanical data from across the UK to monitor change in 30 habitats at small-scales.  Well over a thousand volunteers have chosen one or more 1km2s to monitor long term. Up to 5 plots are chosen for each square and surveyed twice a year. There are 3 different survey levels allowing for a range of skills and confidence.

Arable plants are the fastest declining suite of plants in the UK. This decline of once characteristic arable plants and the habitat they form has had knock-on effects for other species that utilise this important habitat, such as ground beetles and birds. This loss of wildlife is apparent in the demise of colourful hues from cornfield flowers that once characterised our arable landscapes. Colour in the Margins has worked to conserve and champion arable plants and has produced a variety of resources about their ecology, beneficial management practices and how to identify and survey these often under-appreciated and overlooked plants.

We are a group of artists and enthusiasts for botanical art holding at least two virtual exhibitions a year of members' art on our website, alongside a regular blog on topics of interest. Our membership is open to everyone of any ability or level of knowledge, or you can simply subscribe to be notified of new blog posts. Our current exhibition:  https://www.britishbotanicalartists.com/reflections-1

A project undertaken by the Somerset Rare Plants Group (SRPG) to record first flowering dates of wild flowers in Somerset during the COVID-19 pandemic of 2020-21. Initially the project was envisaged mainly as a way of giving SRPG members and friends a much-needed distraction and focus during the early weeks of lockdown. From these modest beginnings it ended up running for a whole year, beginning with the first Lords-and-Ladies of 2020 and ending with the first Lords-and-Ladies of 2021. More than fifty people were involved, including several having to 'shield' through the first lockdown. Analysis of our observations confirmed what we suspected, that the spring of 2020 was indeed a truly extraordinary spring: first dates were, on average, c. 4 weeks earlier than those recorded by Somerset botanist Walter Watson almost a century ago, and c. 2 weeks earlier than those recorded in the Taunton area during the decade 2008-2017. Although ostensibly about first flowerings, the project included a lot of other natural history, while reflecting also on the various trials and tribulations that we (both as a group and as individuals) had to face as the year unfolded. As noted in the preface: "In 2020, the simple daily act of noticing which plants had just begun flowering was one of the things that helped us to navigate through the year. For our little group, the flowers were like stepping stones, way-markers, pin-pricks of light and colour in the darkness. With these first flowerings we made a daisy chain (of sorts) that kept us roped together during a difficult and deeply troubling time."

This new book takes a holistic view at the life cycle of temperate ombrotrophic peatlands, a cycle which has to be considered in millennia. The first part explains why such peat forms, the second part explains the development of patterned bogs, and the third part suggests a new classification system of erosion. The fourth part applies this understanding to the conservation and management of peatlands, and to climate change implications. There are seven appendices, the last of which includes a carbon calculator. The Royal Scottish Geographical Society has kindly supported the printing of the book, which is available from NHBS.com at https://www.nhbs.com/an-illustrated-book-of-peat-2-volume-set?bkfno=252901

The poster describes the various field meetings run by the BSBI, provides contact details for the Country Field Meetings Secretaries and gives a preliminary list of meetings planned for 2022.  Note that the details for many of the meetings listed are still provisional and may change.  Once details are confirmed, probably by early December, the meetings will appear on the main BSBI field meetings page at https://bsbi.org/field-meetings-and-indoor-events

Flowering time variation can be shaped by, and be a resource for, adaptation to different environmental conditions. We use Linum bienne Mill., an herbaceous species with a wide geographical distribution, to study how adaptation has shaped flowering time variation and, more generally, the species' life-history across its native range. To achieve this we have to: 1) understand the underlying genetic structure of the species; 2) describe the intra-specific variation in flowering time and in genes that control it; 3) expose L. bienne populations representative of the species distribution to different environmental conditions. Surprisingly, this species has been poorly described across its range, despite it is the direct ancestor and wild relative of a crop (Linum usitatissimum, flax). Thus, by working with L. bienne, we also produce an important resources for crop improvement.