Studying entire ecosystems is expensive, labour intensive and often requires study over long timescales. Sarracenia purpurea (Purple Pitcher Plant) provides a useful model in which to study the community dynamics of micro-ecosystems on a condensed time-scale.

Studying entire ecosystems is expensive, labour intensive and often requires study over long time scales. Micro-ecosystems can allow study of community dynamics on a smaller scale in a time effective way. Carnivorous pitcher plants host a community of organisms (bacteria, rotifers, mites, yeast and more, see Fig 1.) known as the phytotelmata, that function together as a micro-ecosystem. This community works together to degrade prey caught in the pitfall trap.

Sarracenia purpurea (Purple Pitcher Plant, see Fig 2) has been introduced into Northern Europe from North America (Fig 3). In its native habitat mosquito larvae are the top predators, but there does not appear to be an insect equivalent in European populations potentially shifting community dynamics. Darlingtonia californica (Fig 2) has been introduced into one site in Ireland where it grows with S. purpurea (Fig 3), providing an excellent study site to look at plant influence on community dynamics compared to environmental effects.

1) How do S. purpurea phytotelmata communities differ in native and introduced habitats?

2) Does plant or pitcher morphology play a role in phytotelmata structure?

3) How do the two species utilise different microorganisms to form their phytotelmata within the same site?

Plants as a host ecosystem

Botanical Society of Britain and Ireland 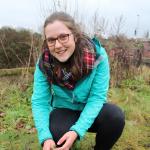