A new population of Creeping Marshwort Helosciaidum repens was discovered at Nuns Bridges, Thetford in 2020 following digging work carried out to create a new wild flower meadow. The site becomes the third extant native population of this rare species in the UK. A quadrat survey in September 2020 produced an estimate of around 18,000 plants on the site; the majority of these were seedlings but many flowering and fruiting plants were also present.

The site is a newly created ‘wild flower meadow’ area. A roughly triangular area was dug out to a depth of c. 30 cm and the extracted soil was placed around the boundary to create a bund. One corner with Turritis glabra was left undisturbed (and outside the bund) to enable this species to persist at the site. The new meadow area inside the bund covered 755 square metres. The new ‘meadow’ was deliberately left unsown to allow natural regeneration to see what would come up.

HISTORIC: The history of the site is uncertain, but it may have been used by locals as a dumping place for rubbish and/or for dredged material from the adjacent River Little Ouse.

PRE-2014: Other staff at the nearby BTO office remember the site being open mown short grass c15-20 years ago.

2014-2019: For at least the last 6 years (Ian Woodward pers. obs.) the site had been left unmanaged with abundant Urtica dioica and Conium maculatum. Tower Mustard Turritis glabra is also present has been monitored by Ian Woodward on behalf of the Breckland Flora Group since 2018.

OCTOBER 2019: Digging to create a wild flower meadow within one part of the site, initiated and managed by the Planning & Countryside Officer (Mark Webster).

WINTER 2019/20: The ‘meadow’ was flooded over winter and some parts of the site remained under water for many weeks

LATE JUNE 2020: A member of the conservation volunteer group reported an unusual umbellifer he had observed on the site, and Mark subsequently informed Ian Woodward and other members of the Breckland Flora Group.

JULY 2020: Ian Woodward visited the site. The plant appeared to resemble Helosciadium repens but could not be conclusively identified and, given the rarity of H repens, it was considered most likely that the plant was a hybrid

LATE AUGUST 2020: Ian Woodward returned to the site when the plants were more mature and some plants were fruiting. The features of the mature plants suggested pure H repens, and following consultation with Twitter followers and subsequently a site visit by Fred Rumsey and Peter Stroh, the determination as H repens was confirmed on 4th September.

SEPTEMBER 2020: Ian Woodward carried out a quadrat survey which has produced a provisional estimate of over 18,000 plants across the site. The majority of these plants were seedlings, but there were substantial numbers of plants in flower and in fruit.

Historically, H repens has a scarce but scattered distribution across south and east England. More recently, it is known as a native only from the well-known site at Port Meadow, Oxfordshire, and from Walthamstow Marshes, where it was refound in 2020 having disappeared for a number of years (per Essex Botany & Mycology Group).  See the BSBI distribution map here.

This discovery was publicised in BSBI News and Views in October.  Read the account here.

Thanks to all those from the Breckland Flora Group, Twitter and the BSBI who helped confirm the identification, to Norman Sills and Linda Gascoigne for carrying out measurements at the site

ABOUT BRECKLAND FLORA GROUP: The Breckland Flora Group was established in 2016 to undertake targeted recording and monitoring of scarce plants in Breckland. 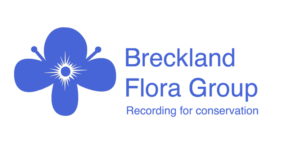